Attention to all Malaysian car owners....FYI.

PUTRAJAYA, Jan 8 - The mechanism for fuel pricing in Malaysia has finally been finalized and controlled under one mechanism, which also takes the high and lower income group people into consideration, according to Finance Trade Minister Tan Sri Anuar Ali.

"From May 1, the fuel will be pegged at RM 3.90 per litre for RON97, while RON95 will increase to RM 3.70 per litre ( from current price of RM1.80 ). However, the prices of national-made vehicles will be lowered by at least 40 percent. For example, a full-spec family sedan Proton Persona 1.6 litre engine will cost around RM 23,000.00 excluding road tax and insurance.

Import tax and excise duty will be revised to only 30 percent, from the current 200 percent. Imported vehicles such as the newToyota Camry 2.4 litre engine will cost around RM 65,000.00." he said.

The mechanics has been said to be undertaken by a team of experts from Australia and Canada who were earlier briefed on the issue of subsidy in this country, whereas after consideration by the transport minister, they have signed the constitution that the system will be made on May 1, the day it goes into effect.

Under the new system, there will be a major effect on the existing consumers who have already purchased a vehicle and to those who are in the midst of repaying the loan of their vehicle to their financial institutions.

The amount has yet to be decided but he assured that the amount will compensate the price of fuel by at least half to eligible Malaysians based on bumi quota.- SkyNet News Asia
Posted by Camelia at 6:08 AM No comments: 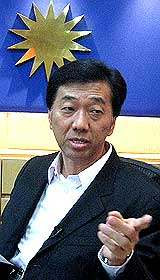 Ong Ka Ting background
==================
Ong Ka Ting, the MCA President married Esther Low Ah Eng on 11 July, 1982.
Esther was actively involved in MCA politics in Wilayah Persekutuan then. They were both financially poor.
Ka Ting asked Esther then to go into business to help him build up his financial status.
Together with siblings from both family, they started a company. Esther was made the Managing Director & Ka Ting as one of the signatory of the company bank account No: 1403911166-1 in Malayan Banking Bhd. Jln Sultan K.L. and Public Bank Bhd. Damansara Utama PJ, as Ka Ting was the chairman of the company at all material time( he is the key person behind the company) even he was still a government servant.
Esther's brother was asked later to charge his bungalow house for overdraft facilities.
During their marriage, Esther even bought a car WV1127 for Ka Ting*s usage. After they divorced in October 1985, Esther was asked to transfer the car to him. However, the car was later sold by Ong Ka Ting and he did not give the proceeds of sale to her despite her difficulty financially.Esther & the brothers were also sued by Maybank being the guarantors for the company in the sum of RM65,000.00.
Even though they approached Ka Ting for help since he was the one who initiated and responsible for the setting up and the business of the company, he not only refused to help but threaten to put the ex-wife to jail if she were expose/reveal this matter.
Today, Esther's brother (Liew Ah Kow @ Lau Choon Bok, Law Choo Heng) are still under bankruptcy charges by bank.
Despite his irresponsibility, heartless and ungrateful attitude in handling this matter, who apparently made use of his ex-wife to establish his career and finance , then dumped her and remarried, he managed to mask himself and deceive the public as morally upright man.
A hypocrite like him has streered the public into wrong perception of moral standing, assuming by irresponsibility, ungrateful and heartless attitude are not important in a leadership's quality.
Beware that such leader like Ka Ting will only deceive the public / organisation in many issues by disguising / masking himself with many faces and lead the organisation to disaster one day... He then would certainly shed away the responsibilities and point fingers to others.

At the said meeting it was also resolved that the bungalow house of my brother, Mr. Low Kim Hoo, to be charged to the bank to get overdraft facilities. This was subsequently carried out.I was asked by Mr. Ong Ka Ting to be a guarantor for the banking facilities.
I signed as a guarantor with Malayan Baking Bhd. for the sum of $80,000-00 overdraft, $40,000-00 Trust Receipt and $165,000-00 Letter of Credit. All the other four directors also signed as guarantor.On 16th August, 1982, Mr. Ong Ka Ting and my brother represented the company to execute an Agency Agreement with Bayerische Stahl Geschirr Werke GmbH in Germany.
Mr. Ong Ka Ting was the Chairman of the company at all material time when he was still a government servant.
On 28th April, 1983, Mr. Ong Ka Ting's brother, Mr. Ong Kim Seng, confirmed in writing that Mr. Ong Ka Ting was an active principal of the company.
During and after our marriage, I was supporting Mr. Ong Ka Ting financially including accommodation, meals, road tax, insurance, marriage expenses and etc.
I even bought a car bearing registration WV1127 for Mr.Ong Ka Ting's used. Mr.Ong Ka Ting asked me to buy a new motor bike and tender a registration number WAL 1000, which I duly did. This was done because he wanted to change the car registration number to WAL1000.
Sometime in December 1983, Mr.Ong Ka Ting came back to the company office with $18,000-00 cash monies with him and he told me that Mr.Tan Koon Swan gave him the said monies at his office, Mr.Ong Ka Ting also told me that Mr.Tan Koon Swan has a lot of cash in his office cabinet.
Mr.Ong Ka Ting gave the said $18,000-00 in order to pay for the purchase of all the company shares of Mr.Ng Chee Chuan and Ms.Teng Gaik Kwan. At that material time Mr.Ong Ka Ting has not got the monies to pay for the said shares.
After we got divorce in October 1985, (early 1986) Mr.Ong Ka Ting asked me to transfer the said car to his name in order to get a loan from JKR. At this time Mr.Ong Ka Ting was the Personal Assistant to Datuk Ling Liong Sik.
Mr.Ong Ka Ting told me that be needed funds to survive. For old time sake I sympathised with him and signed the MV3 Vehicle Transfer Form to him. I even gave 2000 Arab Malaysian Finance Bhd share to him in order to help him.
I Know for a fact that the said car has been sold by him but he did not give the proceeds of sale to me.
Now I have been sued by Malayan Banking Bhd as guarantor for the company in the sum of $65,0000-00, I asked a friend to ask Mr.Ong Ka Ting to settle this $65,000 as he was the person behind it and I became a guarantor at his request.

Mr.Ong refused to settle and threatened to put me into jail if I reveal this matter to anyone.

Mr.Ong Ka Ting also said that he is in a powerful position to do that and therefore, I should refrain from asking him to settle or put pressure on him to settle or to reveal this whole matter.

Please do Justice for TBH,Kugan,Atantuya and forALL Malaysians irrespective of races,religions.

If you are a registered voter,please do not only cast your vote....do start your own "Voter-get-Voters" campaign by chain emails ,auto generated personalised emails,etc etc.

If you are not a registered voters, please do register asap at any post offices which are computerised or at any EC office or at any political parties office as a SNAP general election 13 may be sooner than you think.

Do keep in touch thru www.malaysiakini or www.malaysia-today.net or search under Raja Petra Kamarudin.

Ps : Pls keep forwarding this reminder to "register as voters" to as many people as possible and get them to forward too i.e chain emails for a BETTER & FREE Malaysia \
Posted by Camelia at 2:47 AM No comments: